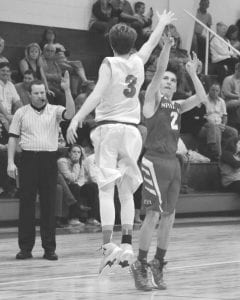 Trent Harris drains a three for the Spartans.

On Tuesday Feb. 7, the Spartans played the Patriots of Pinewood Christian Academy hoping for a big region win, yet they fell short with a score of 51-35.

Sophomore Trent Harris was the leading scorer, putting up 15 points, followed by senior Nathan Mulling with 8. Leading the Spartans on defense was sophomore Collier Smith, who pulled down 8 rebounds.

“We just didn’t get after it like I wanted us to, but we are going to come out ready to play in the first round of the region tournament,” said Head Coach Chance Cofield.

On Friday, the Spartans played the Cavaliers of Augusta Prep and were defeated with a score of 72-30.

Leading the team offensively was freshman Tripp Parker with 8 points, followed by sophomore

The Spartans also began their first round of region tournament on Tuesday, Feb. 14, at Bulloch Academy in Statesboro. They played the Crusaders of Trinity Christian School, but results were not available at press time. Check our Facebook page for updates.