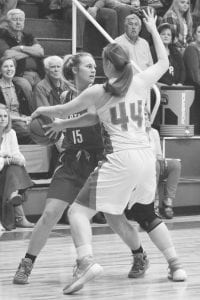 The Lady Spartans traveled to Bellville on Tuesday, Feb. 7, to face the Lady Patriots of Pinewood Christian in a Region 2-AAA contest. Edmund Burke Academy earned an exciting 28-27 victory to even their region record to 4-4 and 12-10 for the season.

The Lady Spartans led after every quarter and survived a late flurry by Pinewood to finish region competition for the regular season.

“Pinewood is always a tough environment to go into,” said Head Coach Larry Keller. “The girls kept their composure and did what it took to win a good road game.”

Marley Knight finally “saw” the light and was both the leading scorer and rebounder, with 8 and 6 respectively.

“Marley has been struggling with her contacts this year and has finally got that fixed,” Coach Keller said, adding that her superb game paired with good plays on the offensive and defensive ends by Tinley Jenkins, Hannah Powell, Madison Dickey and Memory Kate Goodin resulted in a great night on the court for the Lady Spartans.

On Friday night, the Lady Spartans finished their final regular season game with a 48- 41 win over Augusta Prep.

EBA used strong second and third quarters to keep the Lady Cavaliers on the losing side of the score board. “We finally scored some points and were able to keep Prep on their heels,” said Keller.

Goodin had an incredible game with 16 points, followed by Powell who had a double/ double with 11 points and 14 rebounds. Jenkins had 10 points and 8 steals for the night. Sydney Quick, a junior, came off the bench and had what Coach Keller described as “her best game of the year,” adding, “Sydney hit a big three in the first quarter to get us going.” She had 7 points for the game.

The Lady Spartans played in the first game of the 2-AAA Region Tournament last night (Tuesday) at Bulloch Academy in Statesboro, where they faced tournament hosts the Lady Gators. Scores were not available at press time. Previously in regular season, EBA lost against the Lady Gators in their first meeting, 43-36, and then won against them most recently on Feb. 3, with a score of 28-27. If victorious, they will advance in the region tournament on Thursday. Results will be posted at www.burkeacademy.org as well as on The True Citizen’s Facebook page.