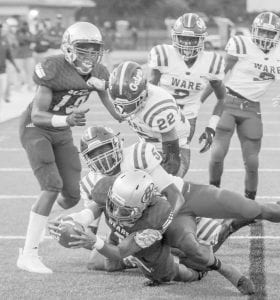 Junior Juan’ya Dove scores the first touchdown for the Burke County Bears in the game against Ware County.

For the second week in a row, the fate of the Burke County Bears hung on the success or failure of a two-point conversion.

Having ended last Friday’s game tied with the Ware County Gators (Region 2-AAAAA) at 17 all at the end of regulation, Burke County scored on the first possession of overtime on an option pitch from Juan’ya Dove to Leon McGee. The junior running back swept wide around the right side of the line to score virtually untouched. Jacob Hickman’s point after was good, putting Burke County up 24-17.

Ware’s quarterback, freshman Thomas Castellanos, would push into the endzone a few plays later to make it 24-23. The Bears realized they would need to stop the two-point conversion when the starting offense stayed on the field.

Castellanos, a big, mobile quarterback, had broken off several long runs throughout the night, so as he stood in an open backfield, Burke’s defense stayed home to prevent him from running across the goal line. That left junior tight end, Mac Johnson, unguarded as he crossed the back of the endzone and Castellanos hit him in stride.

Ware’s 25-24 victory means the Bears have a0-2 start. Unfamiliar territory for a team that was undefeated in the regular season just a year ago.

“We had a chance to win and couldn’t get it done,” admitted head coach Eric Parker. “One or two plays going the other way could have changed things.”

The same could be said for Burke County’s opening season loss to Benedictine two weeks ago in the final game of the Erk Russell Classic at Paulson Stadium in Statesboro. Having pulled to within one point of the Cadets with less than a minute left, the Bears’ two-point conversion was stopped in the backfield, securing Benedictine’s victory 23-22.

Asked before the season about his young team’s mindset, Parker said it’s hard to tell how a team that may have grown accustomed to success will react to adversity. Now that the Bears are two games into the season without a win, Parker believes his team’s hunger is there and will show.

“We knew these two games would definitely be playoff-like games. I think we’re fine. We’ve got a week off to heal up after two physical games and to get better,” he said.

While no team wants to lose, that win-loss record doesn’t count until Region contests begin in October. Parker says the objective continues to be to improve on both sides of the ball each week.

“Nothing’s changed. The goal is still the same,” he said. “We’re on track. We’re going to have to get better on some things but when we do, I think you’re going to see that we’re a fine football team.”

The Bears weren’t able to get much going offensively in the first quarter but the defense wasable to hold Ware to a single, 30-yard field goal.

Dove would put the Bears on the scoreboard in the second quarter with his only touchdown of the night and Hickman’s point after, the first of three, was successful.

The Gators would respond with a 41-yard touchdown pass from Castellanos and an extra point kick.

Hickman barely missed a field goal attempt with just over two minutes left in the half to send the teams to the locker room with Ware leading 10-7.

The Bears’ defense emerged from the locker room with a new intensity and shut Castellanos and the Gators down, holding them scoreless in the third. Burke would score however on a 29-yard field goal from Hickman and McGee’s first touchdown of the night, making it 17-10 with one quarter left to play.

The Bears defense continued to control the game but with just under three minutes remaining Ware County brought the house and Hickman was unable to get off a punt attempt deep in his own territory.

Taking over on Burke’s 34 yard line, Castellanos would quickly score to tie the game at 17-17 and take the teams to overtime.

Ware County had 303 yards of total offense with Castellanos accounting for the bulk of those yards. He had 162 rushing yards on 30 carries and two touchdowns and went 7 for 13 for 111 passing yards with one touchdown.

The Bears had 246 yards of total offense. Dove lead the team with 64 yards on 17 carries and one touchdown, while McGee had 62 yards on 15 carries and two touchdowns. Dove went 4 for 11 to amass 95 passing yards.

Keldrion Cobb led the Bears’ defense with 7 tackles, 2 assists and one tackle for a loss. The senior outside linebacker was selected as the Bears’ Player of the Game.

After a bye week this Friday, the Bears will next face Wilkinson County on Friday, Sept. 7, at 7:30 in the Bear Den.