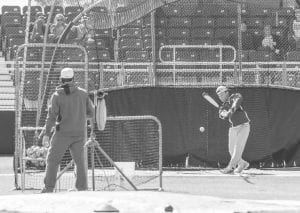 Head Coach Billy Marchman uses the pitching machine on newcomer junior Zach Martin as he competes in the Hit-a-Thon fundraiser held this past Saturday.

The Burke County Bears baseball team had their annual Hit-a-Thon fundraiser this past weekend to help provide the baseball program with money for team expenses.

Head Coach Billy Marchman said that they have eight new freshmen who joined the Bears this season, and two of them will see a lot of playing time on the varsity team.

“The guys competed among grade levels at the Hit-a-Thon,” Marchman said, adding that the junior class left the yard on five occasions with Drew Torek hitting 3 home runs, and Houston Copeland and Bill Knight with 1 each. “Our Dugout Club President Tonya Torek came out and grilled for the kids so we enjoyed a good lunch along with nice weather.”

The Bears began their season yesterday (Tuesday) playing Screven County, but results were not available at press time. They head to Millen to play Jenkins County this Saturday, Feb. 18, with the first pitch at 11 a.m.